Hosting companies like Amazon, Apple and eBay, Luxembourg is a major European player in e-commerce. This growing industry offers many new opportunities for online marketing professionals, who see the Grand Duchy as an attractive place to launch their career.

The internet giant Amazon recently announced an ambitious growth strategy, involving the creation of 470 extra positions in Luxembourg, on top of the 12,000 people it already employs. Many global players, such as Microsoft, Skype, Vodaphone, Apple, eBay and PayPal have opened offices in the Grand Duchy. One reason is the highly developed Internet infrastructure. The country has one of the fastest fibre optic connections in Europe, and counts nineteen datacenters, six of which are of the highest level: Tier VI. To put that into perspective: worldwide there are only 33 such centers.

Because of the small native population in Luxembourg, there is a high need of talent from abroad. “In Marketing & Sales around 30% of the senior positions are recruited from other European countries,” says Maxime Durand, director of Michael Page Luxembourg. “Because of the good salaries, Luxembourg has become a very attractive place to work.”

Over the course of the last decade, event marketing has been perceived as a pillar of a successful marketing campaign in several notable destinations. According to a recent study, budgets for event marketing in the United Kingdom are greater than general marketing spending. Last year, marketing budgets in the UK were reported to have risen by almost 10%.Due to the fierce competition for potential customers and clients on social media, It has become increasingly difficult for brands to connect to new consumers. “Traditional marketing has become less effective in breaking down people’s defense mechanisms”, explains Kerry Smith, founder of Event Marketing Institute, in business magazine Forbes. “Face-to-face interaction has become the best way to create chemistry, moving people and logistics focused on a one, two, or three-day period.”

The increasing popularity of event marketing has made Spain one of the top global marketing destinations for companies and marketing specialists alike. According to Michael Page’s survey of over 18,000 professionals worldwide, over 40% of marketing professionals who are willing to relocate for work see Spain as an ideal destination to boost their career prospects.

Barcelona ranks highly on all international lists of preferred cities for events: the International Congress and Convention Association (ICCA) ranks the Catalan capital second place, after Paris and before Madrid.

Another development that favours Spain as a popular destination is the outsourcing of business process activities. Many companies find it difficult to justify spending money on permanent marketing employees, whereas outsourcing, or “centralising” services, provides an efficient alternative.

Worldwide many countries are profiting from this new trend. Among other European countries, Ireland – ranking 13th as most attractive destinations amongst marketers – has become one of the most important locations for customer experience centers. Huge global brands such as Google, Facebook, LinkedIn and Microsoft have all their headquarters stationed in Dublin.

Eastern-European countries like Poland, Romania and Bulgaria, and countries in Asia, such as India and the Philippines, have traditionally been attractive locations for companies to outsource their marketing operations. However, the Iberian peninsula’s long-standing draw for tourism and the increased buoyancy of the national economy following the 2007-8 global financial crisis is serving to attract high quality candidates from abroad.

For Trend Watch, PageGroup surveyed 18,352 job seekers worldwide, who applied on our Michael Page and Page Personnel websites during the 3rd quarter of 2017. Of the 1,496 marketing professionals who participated in the study, 64% were willing to relocate, for job opportunities, a better salary or a different lifestyle. 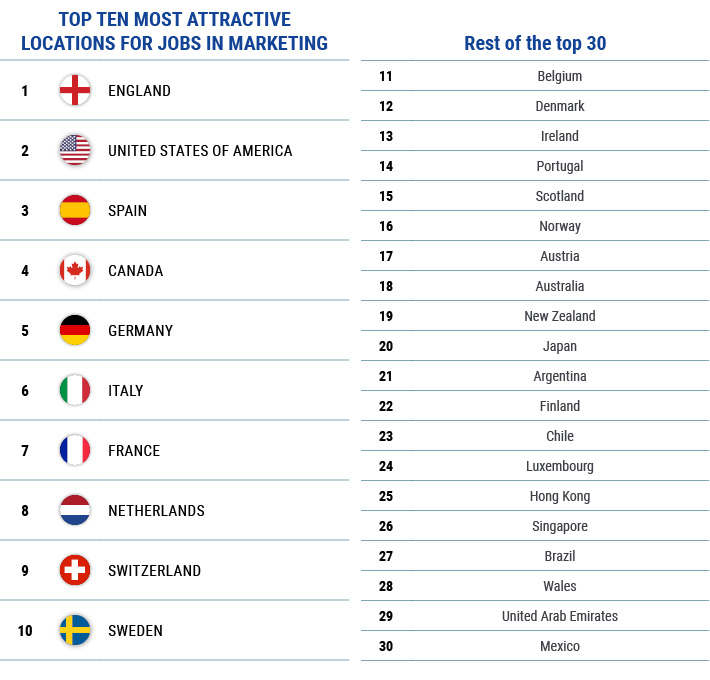 Find out more about the other sector trends

Go back to Trend Watch

Are you looking for a job?

Key insights on salaries by sectors and market trends.

This website has app functionality. Add it to your home screen for fast access and offline features.