The combination of a swiftly developing IT sector and a strong financial industry makes Luxembourg an upcoming hotspot for Fintech in Europe. Globally the country is in the top 25 locations for job candidates in the financial industry.

Experts predict the biggest shift in finance will not come from political changes, new regulations or globalisation, but by technological disruption. New financial technologies like blockchain, mobile wallets and automated advisers will fundamentally change the industry and the need for new skill sets – and therefore candidates. One country that will create many new jobs because of these innovations is Luxembourg.

The Grand Duchy was already a key European and global location for talent in the financial industry. Luxembourg is the largest fund domicile after the US, with more than EUR 4 trillion in assets under management. On top of that, the finance sector benefits from the fact that many financial organisations are looking at Luxembourg as an alternative home after Brexit. Global players in finance, such as Citi Group, M&G, and insurers like AIG and FM Global already to opened subsidiaries or divisions in Luxembourg.

The country is also positioning itself as a world leader in the sphere of digital financial services and as a financial technology hub. The flagship initiative for FinTech is the LHoFT Foundation (Luxembourg House of Financial Technology). LHoFT is a public-private joint venture that drives technological innovation for Luxembourg’s financial services industry. “The IT industry is still in development”, says Maxime Durant, director of Michael Page Luxembourg, “but I definitely see it as one of the most promising industries in Luxembourg, which will generate a lot of new jobs in the future.”

The most popular destinations for finance expats one a global level are still mostly located elsewhere in Europe and the United States, with London being one of leading FinTech capitals in the world. But companies that are looking for expertise have other emerging hubs to choose from. In Continental Europe, Amsterdam and Berlin are also known for their FinTech start-up scene, as are cities like New York and Toronto.

Another global Fintech hub is Sweden. The country, which ranks number 10 on the list of most popular destinations, might soon become the first cashless society in the world, depending completely on mobile apps and cards to make transactions. Swish, a hugely popular app developed jointly with the major banks including in Sweden uses phone numbers to allow anyone with a smartphone to transfer money from one bank account to another in real time.

Adopted by nearly half the Swedish population, Swish is now used to make more than 9 million payments a month. Cash transactions make up barely 2% of the value of all payments made in Sweden, with many banks no longer keeping cash on hand.

For Trend Watch PageGroup surveyed 18352 job seekers worldwide, who applied on our Michael Page and Page Personnel websites during the 3rd quarter of 2017. Of the 2145 finance professionals who participated in the study, 50% were willing to relocate, for job opportunities, a better salary or a different lifestyle. 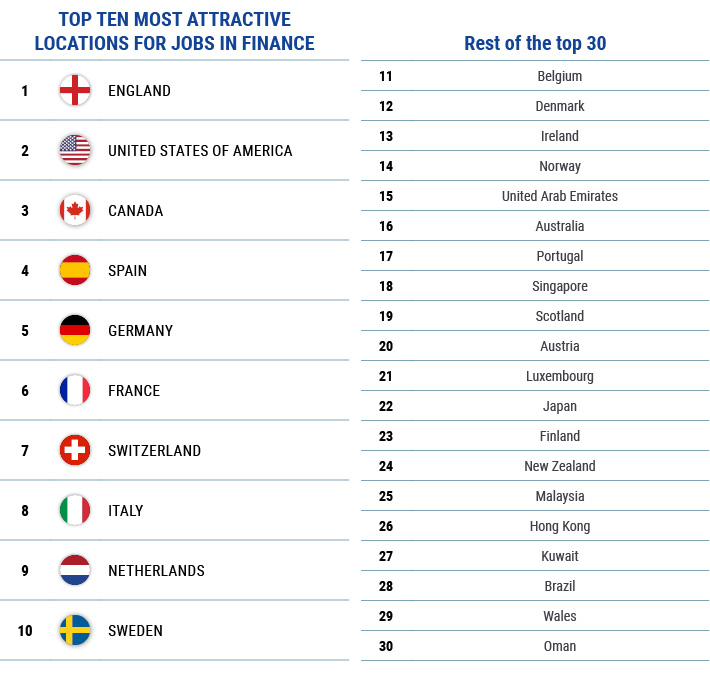 Find out more about the other sector trends

Go back to Trend Watch

Would you like to talk to us about your recruitment needs?

Are you looking for a job?

Key insights on salaries by sectors and market trends.

This website has app functionality. Add it to your home screen for fast access and offline features.